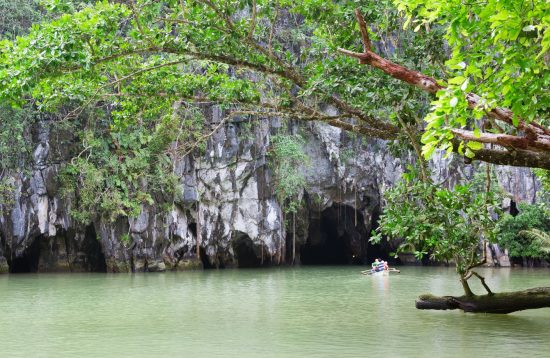 Explore Puerto Princesa Underground River, one of the most amazing attractions of Palawan Island and the Philippines. 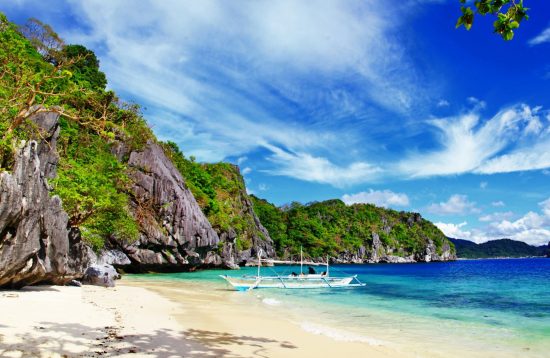 One of Palawan island’s treasures is the Puerto Princesa Subterranean River National Park: the world’s longest navigable underground river. It is a UNESCO World Heritage Site and one of the “New 7 Wonders of Nature”.

Over 8.2 kilometres/ 5 miles long, the breathtaking river winds its way through a fascinating cave system and flows directly into the South China Sea. Twenty-three million years ago this unique limestone karst mountain landscape was formed and includes rock formations and stalactite pillars.

The National Park is nestled in a dense tropical forest home to a variety of exotic species.

If you want to visit the Underground River, here are some of our favourite attractions not to be missed:

Underground can be visited all year round, however, the best time to travel is during the dry season between October and early June. Sea is usually calm during the months of April and May.

Underground River may be temporarily closed to visitors in situations like strong wind, rough sea, and incessant heavy rain.
The wet season is from June to September.

-Private Transfer: Private van is the quickest and least hassle way to get from Puerto Princesa Sabang (Underground River)
Click here to book the private van

-Private Transfer: Private van is the quickest and least hassle way to get from El Nido to Sabang.
Click here to book the private van

-Public Transportation: With no direct link between Port Barton and Sabang, shuttle vans are via Salvation Junction. Get Recaro or Nature Island that go to Puerto Princesa and ask to be dropped at Salvation, where you can catch the connecting shuttle van Luxxus to Sabang. The journey is about 3 hours and 30 minutes, plus the stop in Salvation.

-Private Transfer: Private van is the quickest and least hassle way to get from Port Barton to Sabang
Click here to book the private van

The most popular tour is the full day Underground River Tour from Puerto Princesa.

The 2-day tour package Underground River Adventure is a private tour that includes the trekking along the Monkey Trail and the cruise in the Mangrove Forest. With this package, you will have the opportunity to stay one night at the beach resort in Sabang.

Want to see more attractions in El Nido, which are not included in our ready-made tours? The answer is simple: Request a Tailor Made Tour

Click here to see all our Underground River Tours.

The 5-star beachfront Sheridan Beach Resort & Spa enjoys a quiet location on Sabang Beach. All rooms come with a private balcony, from which some enjoy pool, garden or mountain views. The spacious and air conditioning rooms also feature a flat-screen TV, personal safe and minibar. En suite bathrooms come with either a bathtub or shower.
Sheridan Beach Resort & Spa’s signature swimming pool is 340 ft. long. It is the largest and only one of its kind in Palawan.

Daluyon Beach and Mountain Resort, is a luxury eco 4-star resort with luxurious beachfront cabanas. Cabanas are cozy and well-appointed with contemporary native design and are architecturally structured to provide maximum exposure to natural light and air flow and have direct beach access. All cabanas each have private balconies providing you amazing views of Sabang Beach and the clear waters of the West Philippine Sea.