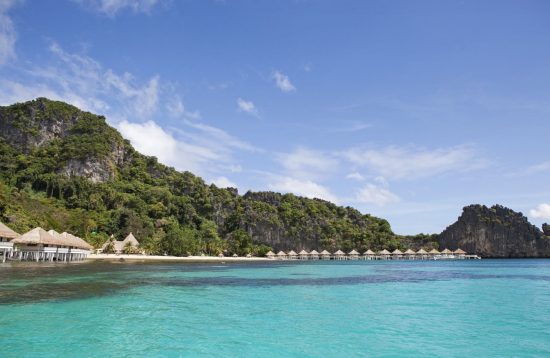 The secluded El Nido Resorts Apulit Island, located off Palawan northern coast, provides a perfect gateway for those seeking rest and relaxation in an unspoiled and natural environment.

Escape to the idyllic islands of Miniloc Island in El Nido and Apulit in Taytay. Let the islands seduce you into a unique experience.

“La Estrella Del Norte” which means “The Star of the North” in English, was a title given to the municipality of Taytay that is found in the northern region of the province of Palawan. It is one of Palawan’s oldest municipalities and was also the first ever capital city of the province – which paved the way for it to gain the title “The Star of the North”.

Before the Spanish Colonization, the Kingdom of Taytay was ruled by a monarch who had ten scribes following him anywhere he goes.

Later on, the king and queen of Taytay were held captive by the crew of Ferdinand Magellan‘s crew who have survived the battle in Mactan where Magellan was slain.

According to Magellan’s chronicler, Antonio Pigafetta, the crew took the king and the queen as a hostage in exchange for supplies which they will need to cross the Moluccas where the Portuguese were so they can seek for help – in which the kingdom complied with.

In 1623, Taytay was formally founded and became the capital province of Calamianes, the entire territory of Palawan which was then known as Paragua in 1818; and the province Castilla, a land area occupying the northern part of Palawan in 1858.

The name Taytay was derived from the word “Talaytayan”, a native word meaning a few pieces of bamboo or wood arranged together to form a bridge, thus, making Taytay mean bridge.

However, during the American era, Taytay ceased being the capital city of Palawan and its administrative boundary was reduced by about 500,000 hectares upon the creation of the Municipality of El Nido in 1916.

In 1667, Fuerza de Santa Isabel – now known as the Fort of Taytay; was built as a wooden palisade under the Augustinian Recollect Fathers and named in honor of Spain’s Queen Isabela II.

Through the efforts of Governor General Fernando Manuel de Bustillo, the original structure was replaced in 1738 by a coral limestone fort. It was built using coral stone and egg whites as a mortar to hold the stones together.

This massive stone fortress was constructed to protect the inhabitants from the ferocious attacks of Muslim Warriors from Sulu who hide behind the mask of piracy to fight the spread of Spanish colonization and the growth of Christianity in the Philippines.

From 1730 to 1739, several pirates were sent by the Sultan of Jolo to take over Taytay, but the fort was a colossal obstacle in their piratical forays.

The fort is quadrilateral with bastions and garitas at the corners. The bastions are named after San Toribio, Santa Isabel, San Juan and San Manuel. The fort was molded and wrought out of the contour of a solid rock, it is a magnificent edifice that stands as a lasting symbol of a rich historical heritage.

Until this day, the small chapel and the canons that are in the fort are still intact and the fort is under the supervision of the National Museum.

According to the legend, during a siege of the pirates, the saint patron of Taytay, Santa Monica, advised the local soldiers to boil water and animal fat and pour it down on the scaling pirates, causing the walls to be slippery and scalding the marauders as well. It sent the attackers to their surrender. They re-embarked and sail back to Jolo, never to bother the Taytayanos again.

Taytay municipality is not only rich in historical value but in natural resources as well, just as the other municipalities in the province Palawan, however, Taytay does not gain as much attention as that of El Nido and the Underground River.

Taytay is not just another municipality in the province of Palawan, it has a lot of things to offer just like the other tourist destinations in the province. It is rich in biodiversity, marine creatures such as sea turtles, fishes, and corals may be found in the area.

Tourists may also opt to go for an Irrawaddy Dolphin Watching tour at the Malampaya Sound. Irrawaddy dolphins are endangered species of dolphins that are endemic in the Malampaya Sound. Unlike the usual dolphins, these dolphins look more like sea cows (dugongs); they have a short snout and slightly paler underparts compared to other dolphins. They also have smaller dorsal fins on the posterior end of their back. They are slaty blue to gray in color.

Tourists will be able to discover various attractions in Taytay which will definitely leave them in awe and admiration for the place.

Cuyawyaw Falls (also called Kuyawyaw Falls) is one of the best-kept-secret places to relax and enjoy the nature at its purest in Taytay.  The 3 magnificent waterfalls, that drop from a height of about 25 metres, are set amidst the natural beauty of the dense tropical forest.

Here you can enjoy swimming in the cool waters, trekking and picnic. The waterfalls are located about 45-minute drive from Taytay town and 30-minute hike from the jump-off point. 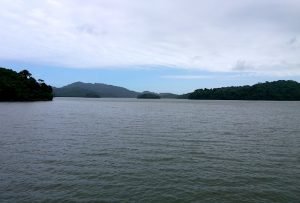 Lake Danao also known as Lake Manguao, is the largest freshwater lake in Palawan. This massive body of water provides habitat to 124 different species of birds. Lake Danao is only 15-minute drive from Taytay town proper passing through rural landscapes and quaint villages.

At Lake Danao you can choose to camp, take a nature hike through the trail path, bird watch or even fish and cook-your-catch in the picnic area. This lake may be inaccessible during the rainy season as the road may be muddy and impassable.

Isla Blanca is one of the most amazing island-hopping and snorkeling destination in Taytay. It’s an outstanding island that features an expansive coral sandbar and a vast coral garden. Since Taytay is not a popular tourist destination, so you may end up having the whole island to yourself.

Isla Blanca’s waters are teeming with corals and fishes, which make them the ideal snorkeling spot, especially in the area where the reef dropping down for about 40 meters.

Activities: Snorkeling, Swimming and Lounging at the beach

No joke – you can rent the entire Noa Noa Island for your tropical getaway.

For many, it is a dream come true to find a tropical island location which is completely secluded and totally exclusive to you and your friends or your loved ones.

Pabellon Islands is a collective name for a group of limestone islands which produce first class quality edible birds’ nests. This includes the scenic Elephant island and Castle Island.

Pabellon Islands are located about 1 hour by boat from Taytay port and can be reached by renting a boat.

The caves and caverns where the birds’ nests are well guarded to preserve the Balinsasayaw nests that are in the area.

Activities: Snorkeling and explore the lagoon

Dinamayan Island is a beautiful island with an expansive white sand beach and vibrant underwater teeming with marine life.

It’s a short boat trip from Taytay port and is owned by the same owner of Casa Rosa Pension in Taytay town, so you can arrange your trip to Dinamayan island through Casa Rosa.

If you are a fan of snorkeling, you will surely enjoy Nabat Island, known for its rich corals and tropical fishes.

Some caves on the island are inhabited by Balinsasayaws birds which build their nests with their own solidified saliva. Edible bird’s nest is one of the most expensive delicacies in the world and is highly prized, particularly in Asia, for its purported health benefits.

Nabat Island has also a nice white sand beach which is only accessible during the low tide.

Malutamban island is a great spot for enjoying a relaxed picnic by the beach.

This unspoiled island in Taytay Bay is also known for its gorgeous views of the white sand beach and turquoise sea. With such tropical scenery, the island is an ideal spot for picture taking and landscape photography. 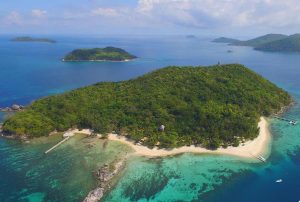 The beautiful yet remote Flower Island is a good choice for those who prefer seclusion and nature for their vacation. The resort is a true tropical island retreat that features only 20 bungalows set amid lush garden, white sand beaches and crystal-clear waters teeming with marine life.

Apulit Island, located in Taytay Bay, offers an idyllic getaway for those who to indulge and unwind in a beautiful tropical island.

The spawning Apulit Island Resort is set within a pristine cove with a wide expanse of white sand beach lined with coconut palm trees.

It boats and unspoiled location and showcases a wealth of colourful tropical fishes and scenic landscapes.

Lover’s Cave, is a pair of coves at the back of Apulit Island, which is only accessible by dipping underwater to enter an arch that leads to the coves. Once inside, you will be amazed by the dramatic limestone scenery.

Tabonito Cave is a cave that serves as a refuge for the endangered Tabon Scrubfowl also known as “Megapode”, and the Balinsasayaw. This cave is characterized by a crack near the peak of Apulit Island.

North Cave serves as a function hall within nature since it is where private lunches and dinners are usually held. In order to access the area, tourists will have to cross a small lagoon in order to go to the inner cavern of the cave.

St. Joseph’s Cave is the biggest cave in Apulit Island and is characterized by a rock formation found at its entrance, shaped like a saint. Inside, you will able to find seven chambers and some other interesting rock formations.

Pasinggatan Festival is an annual event in Taytay featuring several ethnic cultures, songs, dances and local cuisine.  It is a ten-day annual celebration that starts April 25 and ends May 4.

Pasinggatan is a Cuyuno dialect term which means luster or glimmer, because Tyatay is also called “Estrella Del Norte” or  Star of the North of Palawan.

During the Street Dance Competition, you will witness different regional dance groups dancing on the streets together with local and tourist.  Another way to experience the festival is “Paguetekan”, which means to indulge in eating – you can taste many local delicacies from different provinces that are served at the food booths in the municipal complex.

At the Kampo Natin, a cultural campsite, you can buy souvenirs and local handicraft.

The Cultural Night is the most waited event when the pageants of each cultural group, compete to become Miss Taytay. The winner will represent the municipality in the annual Provincial Baragatan Festival held in Puerto Princesa.

Taytay Island Hopping: explore a combination of 2-3 islands by renting a boat for PHP 3,500

Malampaya Sound: is a great place to visit if you’re a nature lover since it’s the home to a critically endangered subpopulation of Irrawaddy dolphins.