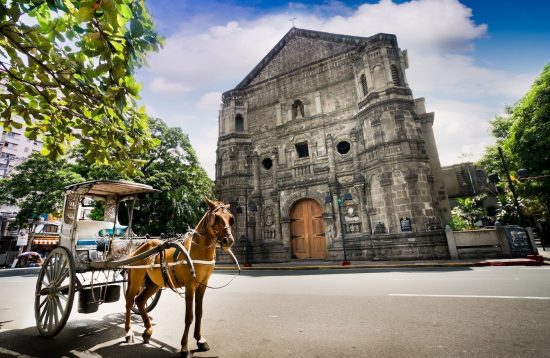 Experience the capital of the Philippines on this tour. Discover Manila’s heart and soul and see the locals going about their day-to-day life as you move from Intramuros to its financial center in Makati.

Manila is the vibrant capital of the Philippines, centre of trade and industry commerce, education, entertainment and arts. It is an invigorating blend of some of the country’s oldest and richest heritage treasures and the most modern metropolitan features of the Philippines landscape.

Manila started as small tribal settlement along the Pasig River before it became the seat of Spanish colonial rule in Asia during the 16th century. Today, Manila is a bustling megalopolis with ultra-modern skyscrapers and over 12 million inhabitants.

Manila is megalopolis composed of 16 cities

Manila encompasses an area of 619.57-square-kilometer (239.22 sq mi) and has a population of over 12 million inhabitants

Intramuros is the historic walled area within the modern City of Manila. Originally, it was considered to be Manila itself at the time when the Philippines was under the Spanish Empire colonial rule.

Manila has a tropical climate with hot temperatures year-round, rarely going below 15 °C or above 39 °C.

A number of hotels and casinos can be found around Metro Manila. Makati, the financial hub of the metropolis is home to numerous international hotel chains.

The average length-of-stay in Manila is 2 days.

Manila is a great starting point for a Philippines vacation. Here are some of our favourite places in Manila and neighboring town, not to be missed during your stay:

Manila has a tropical climate and can be enjoyed any time of year.

Manila is also a city full of events, live concerts and festivals.

-Aside from being a major international gateway city, Manila is also a jump-off point for intra- regional air travel. The Ninoy Aquino International Airport services over 40 airlines providing daily services to more than 26 cities and 19 countries worldwide. NAIA is also a series of domestic airport terminals that act as hubs to various regional and provincial airports in the country.

– Manila is also a popular destination for cruises ships and leisure vessels. Situated within a tranquil harbor, Manila is the chief seaport of the Philippines, serving the city’s commercial needs and is also considered as one of Asia’s major ports.

Scheduled trips to other Philippine ports leave on a regular basis, which provides travelers with a different mode for exploring the country.

Getting around the city can be quite an adventure, and one does not truly experience Manila’s way of life without a ride in a kaleidoscopic Jeepney.
Originally converted from left-over US Army jeeps, the jeepney has become an icon of Filipino ingenuity and creativity and is the backbone of the Philippine transportation system.
Passengers may get on and off just about anywhere. It is the preferred mode of public transport for short distances.

Taxi cabs and buses also ply the main routes of the city. It’s advisable to download GrabTaxi and conveniently book a taxi with a few taps on your smartphone.

For inner city roads, one can always take a tricycle (motorbike with a sidecar) or pedicab (bicycle with a side car).

Some areas like Binondo and Intramuros still have those quaint little kalesas or horse-drawn carriages.

There are presently three elevated railway systems that ply the entire width and breadth of Metro Manila. Stops are strategically positioned to make traveling very convenient and comfortable. The system is a faster option for visiting the city’s various sights and attractions.

Different types of accommodation ranging from luxury to budget can be found in Manila.

Experience the capital of the Philippines on this tour. Discover Manila’s heart and soul and see the locals going about their day-to-day life as you move from Intramuros to its financial center in Makati.