Book online Day Trip Honda Bay Island Hopping. The blue cool waters of Honda Bay in Palawan are dotted with islets that assure one of a pure-pleasure experience. 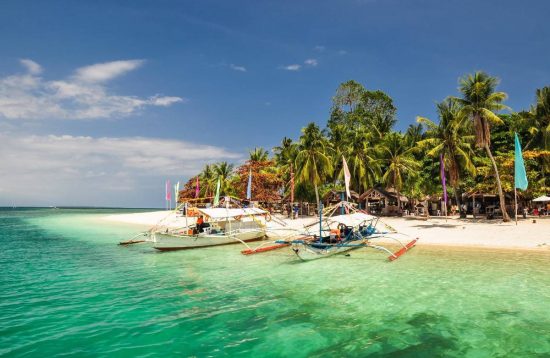 This day trip Honda Bay with private boat is perfect for people in search of a relaxing and enjoyable day in Puerto Princesa.

Honda Bay is one of the most popular tourist attraction in Puerto Princesa well known for its white sand beaches, wonderful landscapes and coral reef, home to abundant marine life.

This tropical paradise of Puerto Princesa, boasts a number of beautiful islands, islets, and sandbars that are commonly visited by tourists on a day trip.

These islands have various diving and snorkeling sites where you will experience the beauty of the marine ecosystem of Puerto Princesa.

Unlike what many people thought about it, starfish island in actually not star-shaped; the name “starfish island” was given to the majestic place because starfishes of varied sizes and colors are found in this place and in fact, this island is actually a sandbar.

Even tourists, both local and foreign find it interesting seeing various starfishes all at one place. It would take about 15 minutes of boat ride from the Pambato Reef.

This island is also known by locals as “Tabuan Island”. It is a small island with few cottages that are available for picnicking hoppers. Its main island is made up of pristine white sand that is surrounded by greenish waters. Few palm trees grow on the island with a mangrove forest that row on the eastern side of the island.

You can visit Starfish Island with Honda Bay Islands Hopping

Lu-li, a shorter term for “lulubog lilitaw” or sinking and surfacing in English, is a name given to the island because of its characteristic.

The tiny Luli islet is a sand bar that is only visible during the ebb tide (low tide) and disappears under water during the high tide.

You can visit Luli Island with Honda Bay Islands Hopping

This beautiful island located in the south of the Snake Island has small drop-offs and good reefs which would serve as great sites for diving and snorkeling.

It is an oval-shaped island that is being managed by the Legend group of hotels which has a hotel in the city proper of Puerto Princesa. The same as the other islands near it, Pandan Island also has cottages that may be rented by its visitors for picnics. Its shores are green while its sands are soft and white.

You can visit Pandan Island with Isla Pandan Honda Bay

Arreceffi Island is an island that is exclusively owned by the famous Dos Palmas Island Resorts which has a variety of activities for tourists to enjoy such as; ocean kayaking, mangrove kayaking, fishing, boat rides, snorkeling, and scuba diving.

Tours to enter this island is separate from tours offered during city tours due to its exclusiveness.

You can visit Arrecife Island with Dos Palmas Day Trip

As its name states, this island is a sanctuary for thousands of bats that would put anyone in awe as they watch the bats making their way out during the late afternoon.

Cowrie Island is the closest island to Honda Bay and is shaped like cowrie – a shell – where its name was derived from. This island is one of the ideal places for picnics, team building activities and for relaxation.

This picturesque island is chosen by many for simply basking under the sun and lazing on the sand.

The swimming areas in its seas are surrounded by a net to make sure that there will be no jellyfishes that could harm tourists, especially during the summer.

You can visit Cowrie Island with Honda Bay Islands Hopping

This reef is found in the middle of the bay where the shallow sections are about 10 feet from the coral reefs. But worry not because there will be life jackets to assure your safety especially for those who are not good swimmers. Tourists will be given the chance to dive down and even touch the various coral species that are in the area. They may also take pictures with the schools of fish that lives in the reef.

Schools of different species of fish swim and live around the living coral reefs which are composed of different kinds of corals that grow in this part of the reef such as the brain corals, staghorn corals, and many others.

It would take about 15 minutes of boat ride from the wharf to get to this marine sanctuary. There will be floating rafts above the middle of the reef which marks the location where tourists may get off and freely snorkel or dive around the reef.

Snake Island is another sandbar located near the Starfish Island. This sandbar has an elongated shape similar to a snake where its name was derived from. Mangroves grow in the southern end of the island while most of its northern section is made up of white sand that stretches up to about 2 kilometers long.

During high tides, most of its long sad bar sinks under water. This island also has cottages that are available for island-hoppers, while its greenish shoreline is rich in marine life that offers the tourists who visit the place a good area to snorkel at.

Helen’s Garden is a sea garden of rich marine life found in Dos Palmas Palawan in Arreceffi Island. This majestic sight is best for snorkeling, where tourists may dip their sunkissed skins in its crystal blue waters that would definitely put anyone in awe.

Many colorful fishes of various kinds and sizes may already be seen which would excite any snorkeling and diving enthusiast to explore the depths of the area immediately. Underwater, there are Photos may also be taken underwater and there will be a guide who will assist the visitors. This is a great training site for divers, an excellent snorkeling site.

For those who are more experienced divers, this diving spot is a good introduction to Honda Bay diving. Marine animals such as blacktip sharks, juveniles, sergeant-majors, snapper, wrasse, trevally and a variety of soft and hard corals.

This reef is being characterized by a small wall that drops off from 5 to 10 meters. The said wall has lots of caves and crevices.

The reef is a good spot for underwater photographers and snorkelers will enjoy cruising over the extensive reef system in the area. Marine animals such as lionfish, cardinals, snappers, sweetlips, and nudibranchs are found on this reef. And if you’re lucky enough, even manta rays.