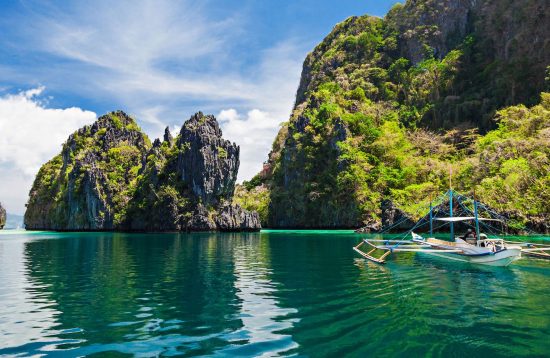 El Nido Tour A is the most popular island hopping tour in El Nido where you will visit the stunning Big Lagoon, 7 Commandos Beach, Secret Lagoon and Shimizu Island. 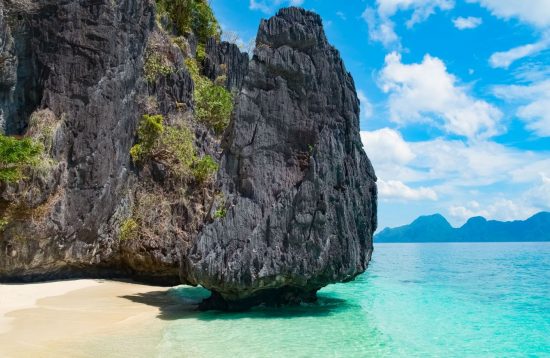 Embark on this El Nido Island Hopping Tour B, which takes you to Snake Island Sandbar, Cudugnon and Cathedral Caves, Entaluala Island and Popolkan Island. 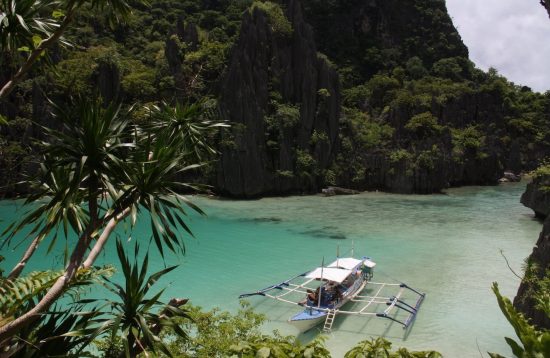 Experience one of the most spectacular beaches in Palawan: Nacpan Beach. It is like a picture-perfect setting with golden sand and pristine waters ideal for swimming.

On a normal day diving you will board a traditional ‘banca‘ boat and set off around 8.30am and head out into the bay, first dive then snack, then the second dive, lunch on the boat, third dive and return to the hotel around 4.00pm.

The dry season is between December and February. The water temperature is around 25 degrees. This is also the plankton season when the visibility can be low, but you may encounter manta ray and whalesharks.

Miniloc Island offers four sites, Tagbao Island, Biet Point, Twin Rocks and The Wall, all of which are relatively calm and sheltered year-round. Both sides are good training grounds for novice divers and can also be appreciated by experienced snorkelers.

South Miniloc known as Biet Point, is the most popular dive site in El Nido located in the south-east tip of Miniloc Island. This site was discovered by Jacques Cousteau in the 1970’s. The highlight of South Miniloc is a beautiful area of cabbage corals inhabited by big school yellow snappers and silver tunas. Divers may also encounter jacks, barracudas, squids, cuttlefish, and angelfish. South Miniloc is a reef at a depth of 12 meters with a triangular shape, facing Simizu Island and separated by a channel. It’s a challenging dive due to the strong current between the 2 islands.

Tagbao island is located off the northwest point of Miniloc Island. This small island is also known to many as “Tres Marias” in reference to three important reefs nestled between Tagbao and Miniloc. This place is suitable for beginner level divers since it’s a shallow site. Divers can expect to see a lot of reef fish, corals, and bountiful crayfish.

Twin Rocks is a site that slopes 13 to 21 meters similar to Biet Point and has a sandy bottom. It is found on the north side of Miniloc Island. It is characterized by corals, sea whips, and sponges. Divers may encounter stingrays and schools of angelfish here.

Dilumacad Island or Helicopter Island as the island looks like a helicopter when approaching from El Nido has multiple dive sites and it’s best known for its cave dive. The entrance of the caves is situated at 12 meters depth and the tunnel is about 35 meters long. This spectacular dive site is for advanced divers only. The sandy bottom of the cave is home to small fishes and crabs, while the rocky area near to the exit is inhabited by large fish such as Spanish mackerel and jacks.

Matinloc Island is quite similar to the Miniloc island when it comes to diving sites, it has various diving sites surrounding it that offer many different kinds of fishes that serve as eye candies for diving enthusiasts.

Banayan Point, situated in the southern tip of Matinloc Island is a great site to see pelagics. The strong currents in this area can bring tuna, jacks, and mackerels. Another highlight of this dive sites is the eye-catching coral encrusted rocks.

Bikanayos Rock is a diving site that is also known as Picanayas and is found on the western side of the Matinloc Island. It has various large boulders around it. Whitetip sharks are frequently spotted in this site while Pelagics can also be seen here often.

Inbogal Point is found just to the southwest of Bikanayos. It has some impressive gorgonians and green corals on a 35 meters slope. It is home to a unique species of angelfish named Pomacanthus annularis which can only be found at Inbogal Point and in Tres Marias; and is a common sighting spot for tuna, jacks, and mackerels.

A steep wall with some lovely green corals and impressive gorgonians, this dives main attraction is the chance to encounter some large pelagics.

The Aberdeen’s Reef located in the south-east of Miniloc Island is well known to have an incredible variety of fishes and corals. Garden Eel, Butterflies, Damsels, Fusiliers, Rabbits, Wrasses, Unicorns, Angels are usually seen in this site. It’s also a good macro site with a lot of nudibranchs.

Paglugaban is another limestone cliff island near Miniloc best known for macro diving as it has an incredible variety of nudibranchs. Divers may also encounter Bumphead Parrotfish, marble ray, turtle, lionfish, and grouper.

North Rock A single rock which can be circumnavigated if the currents are right. This dive site is famous for its pelagic life and beautiful hard and soft corals.

Nat Nat Beach, located in the southern part of Cadlao Island, it’s another dive site in El Nido. It consists of a reef with sandy patches at a maximum deep of 20 meters. This site has an incredible variety of coral, fishes and macro life. Divers can see nudibranch, eel, stonefish, anemone fish, turtle, and seahorses.

There are many dive sites around Entalula Island. South Entalula has some of the most beautiful coral formations and gardens with many tropical fishes. West Entalula is a wall which goes down for about 35 meters. Divers may encounter many fishes hidden in the small caverns along the wall including clams, lionfish, octopus, frogfish, scorpionfish, and turtles.

The best time for diving at El Nido is during the months of March to May, as surface conditions are good.