Points to help you to make the right choice

Planning a trip to Palawan but can’t decide where to go between El Nido and Port Barton? Curious about which one is worth visiting?

Both El Nido and Port Barton offer beautiful beaches and tropical islands that would fulfill anyone’s holiday dream. To help you decide, we put them face to face. 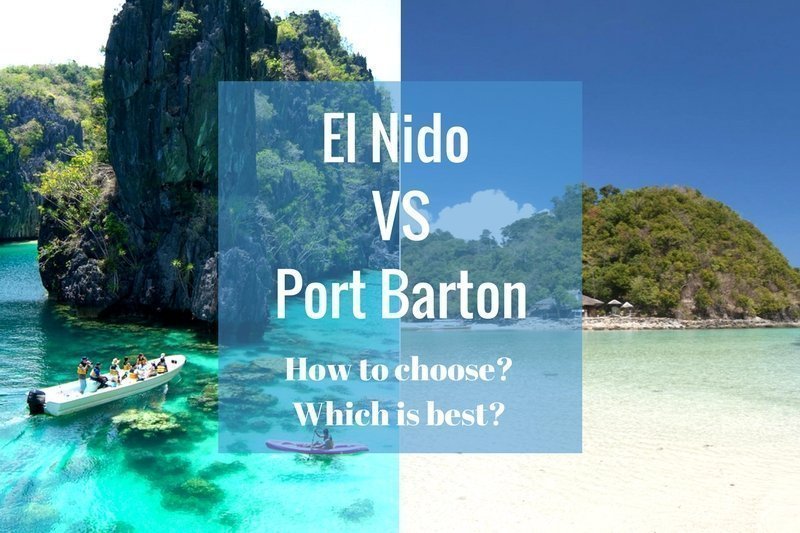 El Nido has become famous over the past few years, thanks to its diverse and breathtaking landscapes.

El Nido town proper has an ordinary beach – certainly not the best beach in Palawan – however, it serves as a jumpoff point to explore Bacuit Bay’s archipelago.

Bacuit Bay is a place with surreal beauty, dotted with pristine islands and islets, each has its own unique geological formations. The islands of this archipelago are blessed with dozens of beaches. Entalula, Lagen, Simizu and Miniloc islands have powdery white sand beaches and crystal clear water.

Matinloc Island has a hidden beach, which is a pocket of white sand beach surrounded by steep rock walls, that is only accessible through a narrow crevice.

Cadlao is the largest island in El Nido and is the closest to town proper. There are several beaches on Cadlao Island, including  Bocal Point, Natnat, and Paradise Beach on the southern side of the island.

Most popular beach options on the mainland include Corong Corong Beach, a long, narrow beach to the south that faces Bacuit Bay and Las Cabanas Beach that has a relaxed atmosphere and spectacular sunsets.

Lio Beach is a wide and uncrowded beach north of El Nido town. For now, it remains almost empty save for a few restaurants and hotels, so finding your private patch of sand shouldn’t be a problem.

The beautiful 7 Commandos Beach is an isolated beach that is located on the mainland but only accessible by water, due to the mountainous terrain. 7 Commandos Beach has sugary white sands, dreamy blue sea and it’s lined with coconut trees.

Probably the spectacular Nacpan Beach, which is about an hour’s drive north from El Nido town, is one of the beaches in the Philippines.

Duli Beach is another remote stretch of golden sand in the northern top of El Nido mainland. This beach is the center of Palawan’s surfing community.

Port Barton is one of the lesser-known places that are worth seeing. It’s less crowded than El Nido and it’s perfect for a stress-free weekend gateway.  Port Barton is very affordable and has a laid-back atmosphere.

Port Barton’s main beach, known as Itay Itay, is filled with rustic accommodation, beach chalets, restaurants, and bars. The waters around Port Barton’s Itay Itay are not good for swimming, but there are other nicer beaches to explore nearby.

It’s possible to rent a “Banca” boat directly from the local people and explore some of the most beautiful and secluded beaches found nearby.

Pamuayan Beach is about a 10-minute boat ride, while White Beach can be reached by walking along a forest trail.

There is no shortage of beautiful beaches on the islands of the bay. Paradise Island, Exotic Island and German Island have tiny white sand beaches and perfectly clear water.

Which one should you really pick?

The beaches in El Nido are far better than the ones in Port Barton. On the other hand, in Port Barton, there are more virgin beaches and fewer tourists than El Nido.

Until a few years ago, El Nido was a tranquil fishing village unknown to tourists. However, it was already popular among scuba divers for its abundant marine life.

Nowadays El Nido is one of the most popular tourist destinations in the Philippines. Tourists travel here from every corner of the globe to admire El Nido’s many beautiful islands and explore the underwater world that is filled with beautiful corals and an abundance of marine life.

El Nido is the primary base for exploring Palawan’s best attraction, the stunning Bacuit Archipelago.

Bacuit Archipelago has numerous tiny islands that are scattered in its bay. Most of them are uninhabited and many are close to the shore and can be easily accessed by a rental boat.
Each island has striking landscapes above and below the sea – it’s difficult to describe the beauty of this place, you should go and see for yourself.

The islands offer numerous water-based activities, such as diving, snorkeling, and kayaking.

Port Barton is a quieter, smaller, and more laid-back version of El Nido. The activities you can do here are very similar to those in El Nido but cheaper.

There are many appealing islands, with spectacular beaches and good snorkeling sites. It’s possible to arrange a private boat with the local boatman or join one of the island hopping tours.

There are 4 island hopping tours, known as Tour A, B, and C. Each tour features different islands – no matter what tour you choose, the beautiful sceneries of the islands will take your breath away.

With its unique setting and “postcard-perfect” scenery, the islands of Port Barton are a great place to relax on the beach under the shade of a coconut tree or swim in the calm waters.

You won’t find large attractions and resorts here, nor will you find fleets of tourists, but you will find a delightfully peaceful and tranquil environment, filled with nature.

Which one should you really pick?

In El Nido, you can keep yourself busy for days with various activities. Island Hopping in Port Barton is a bit slow repetitive.

El Nido has more hotels than Port Barton from budget guesthouses to mid-range resorts with great facilities. Among the hotels in El Nido, there are also a couple of outstanding luxury properties, with breathtaking views, amazing facilities, and exceptional service, among other perks.

The hotels in El Nido town are the perfect base from which to discover the many islands in Bacuit Bay.

Lagen, Pangalusian, and Matinloc are the most exclusive resorts in El Nido, they are perfect for couples and honeymooners.

Port Barton is less developed than El Nido and its largest resort has less than 15 rooms – don’t expect any frill or luxury service here.
Most hotels are located along the main beach. These are mostly small guesthouses with simple beach bungalows. Only a couple of them has 24hrs electricity and air conditioning.

Port Barton is definitely a good option for backpackers and anyone looking for affordable accommodation.

El Nido has high prices compared to other places in Palawan.

Both Bort Barton and El Nido have a tropical climate, however, Port Barton gets more rainfall than El Nido during the wet season.

Palawan has a reputation for being quiet after dark. Although El Nido has a more active nightlife scene, there is not a “real” nightlife in both places. Port Barton is a place to relax and do nothing and is definitely not known for its nightlife.

Ultimately, which is the better destination between Port Barton and El Nido depends on the sort of traveler you are and the sort of vacation you are hoping to enjoy.

Young adventurous travelers are more attracted by Port Barton, while beachgoers and divers will fall in love with El Nido.
Families and honeymooners coupe will find the trip more comfortable in El Nido

El Nido is better you want a sophisticated vacation in an exclusive destination. On the other hand, Port Barton with its relaxed appeal is the kind of place for those chasing roads less traveled.

Port Barton and El Nido offer a wide variety of experiences and, being fairly close to each other, there’s no reason why you can’t visit both places.