Palawan’s outstanding land and seascapes make it a world-class cultural, adventure and nature destination. From trekking through the hills, valleys, and rivers to snorkeling and diving, to partaking in and celebrating with the locals at some of the diverse festivals held throughout the year, there are truly remarkable experiences awaiting you in Palawan.

Weather: tropical climate with a dry season and a wet season

Most beautiful islands and beaches: El Nido and Coron

Things to do: island hopping, hiking, diving, snorkeling or just relax on the beach

The island province of Palawan has much to offer to those who want to get to the heart and soul of the Philippines.

The more adventurous traveler can visit one of Palawan’s indigenous people, the Batak, whose settlements are on the slope of Cleopatra’s Needle. The Tabon and Palawan Museums with their displays of prehistoric artifacts from the Tabon caves and items from the Spanish era bring the areas’ local history to life and are well worth exploring. There is an amazing variety of architecture from the famous Lighthouses at Poblacion and Brooke’s Point, to the Fort at Cagayancillo and Culion Cathedral. For a more lively experience of Palawan culture, there are numerous colorful and exciting festivals held throughout the year featuring parades, processions, religious ceremonies, and dance displays.

The opportunities for adventure in Palawan are endless. The province has some of the most exciting and challenging dive sites in the world with a myriad of marine life to view and photograph. Kayaking and rafting among the spectacular limestone cliffs and the extensive coral reefs provide exhilarating challenges with stunning backdrops. There is also sailing, fishing, and canoeing for those who prefer a slightly slower-paced activity. Horse riding and inland trekking are ‘must-do’s’ with the hilly terrains of Nagtabon Beach and the El Nido Cliffs’ ideal spots for both activities.

The natural environment of Palawan is varied and breathtaking. From game and marine reserves to lakes and subterranean rivers, coral reefs, and fabulous beaches there is much to experience.

UNESCO has sited Tubbataha Reef and the Saint Paul Subterranean River National Park as World Heritage sites with good reason. There are numerous outstanding seaside areas to explore with Honda Bay, Meara Marina, Starfish Island and Snake Island, some of the most beautiful places in which to swim, snorkel and dive.

Palawan consists of 1,780 islands of pristine white beaches, dramatic rock formations, secret coves, and underground mysteries. An untamed land, a nature lover’s paradise, and an adventurer’s dream: Palawan certainly lives up to its image as the last frontier.

The island province has been declared a nature sanctuary of the world and for good reason. It is wrapped in a mantel of rainforests, outstanding dive sites, majestic mountains, primeval caves, and shimmering beaches. It bursts with exotic flora and fauna and is surrounded by a coral shelf that abounds with varied and colorful marine life. 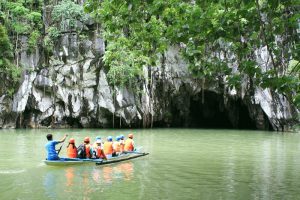 The long narrow strip of the main island, located southwest of Manila, is around 425 kilometers long and 40 kilometers at its widest. On both sides of a backbone of tall mountain ranges, an irregular coastline meanders in intervals of a vertical limestone cliff and sweeping white sand.

This unique topography provides a wealth of diverse pursuits for the traveler to its shores. Palawan was also named “World’s Best Island” by Travel + Leisure for 2013 and included in Condé Nast Traveler’s “Destination to Watch in 2013.” 2. Iwahig Prison and Penal Farm – the minimum-security inmates of this prison are not locked up but instead, live in dormitories with their families and work on one of the many agricultural projects located within the prison farm. Tourists can buy handicrafts produced by the inhabitants. 3. Palawan Wildlife Reserve and Conservation Centre – the centre is both a tourist attraction and research facility, with the aim of conducting studies on how best to preserve endangered species of crocodiles. It also has a mini-zoo featuring some of Palawan’s unique endemic species of animals. 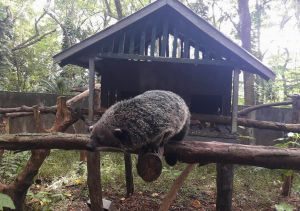 4. Vietnamese Village – this village was erected to house the “Vietnamese boat people” displaced by the Vietnam War, and who came to Palawan in the late 70s. Today, the residents are part of the local landscape and have integrated into the cultural fabric of the city. The village offers super Vietnamese cuisine.

5. Butterfly Garden – tourists are surrounded by butterflies in this garden of exotic Philippine flowering plants. Occasionally, one can witness the emergence of a young butterfly and other unusual insects. 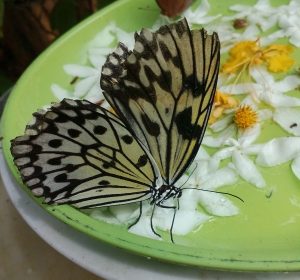 6. Mitra’s Ranch – an ideal picnic spot overlooking Honda Bay and the soft breeze is refreshing after an entire day of being under the sun. Attractions to the North of Puerto Princesa 8. Stan lake Island Tabon Bird Sanctuary – a bird refuge where a number of endangered species can be found. This bird watcher’s paradise requires some traveling by land and sea. Roxas provides the jump-off to this remote island.

9. Batak Tribal Visit and Jungle Trek – an endangered indigenous mountain-dwelling tribe with a dwindling number of less than 500. En route to this remote village, one treks along virgin forests, untouched for centuries. Overnight stays in tents along the fringes of the village are possible. 10. El Nido Marine Reserve – situated in spectacular Bacuit Bay, many travelers have identified this corner of Palawan as the most beautiful place on earth. It is a popular nature spot boasting of extraordinary natural sceneries and ecosystems such as rainforests, mangroves, white sand beaches, coral reefs, and limestone cliffs. Visitors may even dive amongst the rare aquatic mammal, the Dugong. AttractIons to the South of Puerto Princesa. 11. Tabon Caves – a 138-hectare complex of rugged cliffs and deep slopes. Known as “The Cradle of Philippine Civilization,” the caves have yielded the fossil remains of the 22,000-year-old Tabon Man. Of the 200 caves, seven are open to visitors, including Tabon Cave, which was used for habitation and / or burial sites by ancient peoples.

12. Rasa Island Bird Sanctuary – a spectacular island sanctuary that is home to 87 unique bird species, including the Palawan hornbill. Tours also include visits to waterfalls and mangrove forests.

The Philippines’ first inscription on the UNESCO World Heritage List in 1993 was the Tubbataha Reef National Marine Park in Palawan. It is one of the most outstanding coral reefs in Southeast Asia consisting of two coral atolls covering an area of 33,200 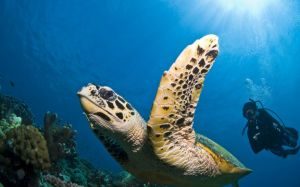 hectares. It contains a very high density of marine species surpassing any reef of the same size anywhere in the world. Located in the middle of the Sulu Sea, getting to Tubbataha involves a 12-hour boat ride from Puerto Princesa.

The optimal season for visiting Tubbataha is from March to June in an intensive, immersive week-long live-aboard journey. The reef offers one of the best diving in the Philippines, and the hardy traveler finds an entire range of aquatic animals, from huge pelagics down to the tiniest species. The islets also serve as an important refuge for seabirds in Southeast Asia. Tubbataha’s islets are believed to be one of the last breeding grounds for a host of endangered bird species.

The Calamianes group consists of 4 major islands – Busuanga, Calauit, Coron, and Culion. Like the rest of Palawan, the Calamianes offers a plethora of activities for the adventure-hungry visitor, ranging from hiking, rappelling, diving, snorkeling, archeological exploration, kayaking/rafting, sport fishing, beach hopping, tribal encounters and more. In the case of this island chain, however, everything is within striking distance to one another – a mini-Palawan, so to speak.

Busuanga is the largest island in the Calamianes group and serves as the access point to the rest of the chain. Regular daily flights land in Busuanga Airport from Manila, Puerto Princesa or Boracay. 45 minutes from the airstrip is the island capital Coron, providing accommodation to backpackers and adventure seekers at very affordable prices. Coron is a market town where travelers will find most of their needs before proceeding further afield.

Busuanga’s charms are found all along its rugged coastlines and surrounding islets. Some of the most beautiful islands and resorts are found just a few minutes offshore. The islands surrounding Busuanga offer some of the most diverse eco-systems in the country and are considered to be among the best diving areas in the Philippines.

The islands’ claim to fame are the world-famous Coron Wrecks, which are mostly found in varying depths within Coron Bay. During World War II, the area served as a secure anchorage for the Japanese Fleet. But on 24 September 1944, a US Navy strike force of fighters and dive-bombers attacked the Japanese supply fleet of up to 24 ships. This resulted in one of the most condensed spectacular wreck diving sites in the world. Coron Island (not to be confused with Coron town) is also blessed with a wide range of dive sites, ranging from shallow reefs to spectacular underwater caves.

Coron is also famous for its seven mountain lakes, which are indeed the main overland attractions that provide views of stunning limestone cliffs from the Jurassic era. Among them are Kayangan Lake, which has been adjudged as the cleanest in all of the Philippines, Barracuda Lake, which is a challenging dive for those in search of the underwater Barracuda Cave and the Twin Lagoons which are connected by a small underwater passage where cool, fresh mountain waters mix with the warm and salty waters from the sea. Most parts of the island are sacred ancestral lands belonging to the Tagbanua, a Northern Palawan tribe. Some areas are not open to visitors, but despite this, the parts that are open provide some of the most attractive landscapes in the entire region. Between Busuanga and Coron Islands is a place called Siete Pecados – seven islets in a semicircular string blessed with a shallow but stunningly beautiful coral garden. Nearby is the Maquinit Hot Springs, where visitors can rest tired bodies and limbs in therapeutic pools of hot volcanic water gushing into the open sea. Calauit Island became home to exotic animals from Kenya in response to an appeal by the International Union for the Conservation of Nature (IUCN) to provide a sanctuary for endangered African wildlife. Today, one finds herds of giraffe, zebra and other African animals living side by side with the local species of animals, like the Calamian deer and the bearcat.

The surrounding waters are also a refuge for sea turtles, giant clams and dugongs. Culion, a leper colony in the early 20th century is now a first-rate town possessing the best medical facilities in the island chain. It currently has a thriving research and medical community is driven by its history to be at the forefront of medical developments.

The Historical Walk of Culion, which takes one to the Leprosy Museum, The Culion Sanitarium and General Hospital are well worth a visit as is the Church of the Immaculate Conception and the Plaza Avellana-Basa. For the more adventurous visitor, the interior of the island can be accessed either by trekking or by bicycle whilst the outer fringes of Culion are studded with untouched mangrove forests waiting to be explored.